据史料记载，唐朝太宗皇帝李世民贞观之治，国泰民安富国强兵。公元六百四十一年:吐蕃王(西藏)松赞干布向唐皇求婚，李世民把宗女文成公主嫁给松赞干布。出嫁队伍车龙十里之余，日用物品、生产工具、艺术品、乐器、医药、书籍，金银财宝。并有一批篆刻唐朝金库的黄金佛等。供赠送喇嘛头领礼物，随行人员五千余众，物宝天华应有尽有。绐吐蕃经济、文化、军事、制造起到天翻地覆的巨大变化，同时松赞干布为迎娶文成公主在西藏拉萨选地拆除帐篷，建造布达拉宫，现在雄伟布达拉宫是文成公主居住后从汉文化逐步形成的仿汉王宫殿。According to historical records, Emperor Taizong of Tang Dynasty, Li Shimin, ruled Zhenguan, the country was peaceful, the people were safe, the country was rich and the army was strong. 641 A.D.: the king of Tubo (Tibet) Songzan Ganbu proposes to the emperor of Tang Dynasty, and Li Shimin marries Princess Wencheng to Songzan Ganbu. The wedding team has more than 10 Li to spend, including daily necessities, production tools, works of art, musical instruments, medicine, books, gold and silver treasures. And there are a number of gold Buddha seal cutting Tang Dynasty Treasury. There are more than 5000 members of the entourage, and Tianhua has everything. At the same time, in order to meet Princess Wencheng's gathering, Songzan Ganbu demolished his tent and built the Potala Palace in Lhasa, Tibet. Now the majestic Potala Palace is a palace imitated of the Han Dynasty gradually formed from Han culture after Princess Wencheng lived. 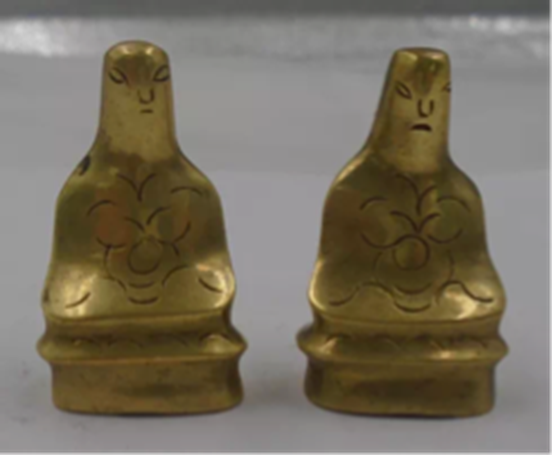 自古以来，黄金就受到人们的重视，早期都是部落首领、王者将相权力的象征，多数用作祭祀用品，品级极高，在皇室内部作为财富流通，现在更是成为国家财富的象征，纵然是在唐宋辽时期，也是王公贵族的爱物。Since ancient times, gold has been valued by people. In the early days, gold was a symbol of the power of tribal leaders and princes. Most of them were used as sacrificial objects with high grade. As a wealth circulating within the royal family, it is now a symbol of national wealth. Even in the Tang, song and Liao dynasties, it is also the love of princes and nobles.

这对金佛的底部 印有“唐朝金库”字样， 收藏的黄金佛从外表上看，和普通人的大拇指一般大。金佛通体呈金黄色亮泽，摸上去手感光滑。从正部到背部部底端，有花纹点缀，更添立体感。黄金佛的底部印有“唐朝金库”字样。从品相上看，黄金佛整体保存完好，是一次性浇铸而成的。在唐朝时期，佛教是名副其实的第一信仰，金佛象征着祈福，故也是皇帝当时对于女儿文成公主的祝福。是市面上非常稀少的一种，加上独特的文化底蕴及收藏价值，在拍场上备受藏家追捧。故价值一直也是居高不下。
The bottom of the pair of golden Buddhas is printed with the words "Tang Dynasty treasury". From the appearance, the collection of Golden Buddha is as big as the thumb of an ordinary person. The whole body of Jinfo is golden yellow with smooth feel. From the front to the bottom of the back, there are decorative patterns to add a sense of three-dimensional. "Tang Dynasty treasury" is printed on the bottom of the Golden Buddha. Judging from the appearance, the Golden Buddha is well preserved and is cast at one time. In the Tang Dynasty, Buddhism was the first belief worthy of its name. The Golden Buddha symbolized blessing, so it was also the emperor's blessing to his daughter Princess Wencheng. It is very rare in the market. With its unique cultural heritage and collection value, it is sought after by collectors in the shooting field. Therefore, the value has always been high. 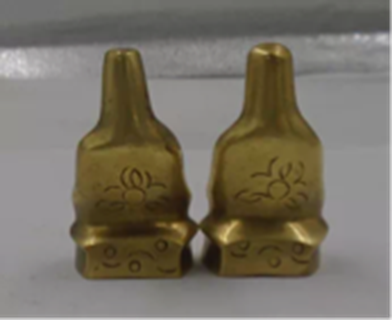 This group of golden Buddhas is rare in the world, and the Baoji on it also witnessed its historical accumulation. It has very obvious historical transitional characteristics and has an indescribable collection significance. The collection is well preserved and clear, and the current overseas market in the mainland is not inferior to it. Collectors and investors have richer knowledge and broader vision, and profound changes have taken place in their concepts. They pursue more stringent collections. On the premise of rarity and rarity, they pay more attention to the perfect appearance and future value of collections.

The Buddha statue is the most widely contacted and longest lasting sculpture art among Chinese. It undoubtedly supports the whole sculpture system of ancient China and represents the highest aesthetic value of an era. In many art categories, only the purchase of Buddha statues will make people respectfully say "please". Twenty years ago, the collection of Buddha statues was only a small category in the miscellaneous special events. Now, the Buddha statue exhibition has become an independent art major, and is one of the most popular special events in the art auction market in China.